A little break in Firmware development to help my client, an IoT start-up, diagnosing The Popcorn Effect. Something I’ve never seen with my own eyes before. The Popcorn Effect is a direct consequence of Moisture entering the IC before the reflow process. A common problem in Electronics Manufacturing.

It all started on the assembly line, the IoT product is a kind of thermometer. The production has just started and the first pieces have arrived, ready for testing. One of the test consists of heating the thermometer up to 95°C, repeated 3 Times. It all worked fine up to 40°C when suddenly the software indicated 0°C for 9 of the devices. You would think they all worked fine until they reached that temperature. Some even recovered when cooling down.

A first visual inspection of the PCBA by microscope doesn’t show any defect, all components are populated properly.

Measuring the power supplies: it seems like it’s all fine.

The temperature sensor is the TI TMP-100-Q1, connected to the host controller via I²C.

Next step, how does the I²C CLK and DATA look like?

They both look fine, except the data is always HIGH. So returning 0xFFFF to the app which represents -0.0625°C and then displays the nearest integer, 0°C.

A closer look with the microscope and yes, here we go. The IC is cracked at its base. Some chips present a slight crack between 2 pins, others show a very clear crack around the corner. 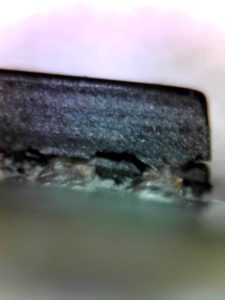 Because moisture found it’s way into the package and expanded in the reflow process, the IC pops like a popcorn.

Manufacturers deliver the ICs in a sealed package if they are sensitive to moisture. MSL is the Moisture Sensitivity Level, provided by the manufacturer. This indicates how many hours an IC can be exposed to the ambient air before it needs to be baked to escape the trapped moisture in preparation of the reflow.

The TI TMP-100-Q1 has an MSL 1, which generally means no particular precautions need to be taken. Despite this, level 1 does specify some limits. This example proves that from the chip production to the PCB reflow in Asia, moisture can affect the production even with a MSL 1 rated chip.

In our case, most ICs stopped working, some only at higher temperatures, some recovered when cooling down. Imagine how many hours could be spend looking for a software bug on something as sporadic as that!

The PCBA manufacturer has been notified of the issue and will cook all of these ICs before reflow. This is a standard process that consists of extracting moisture / drying the ICs for many hours at moderate temperature.

Jerome
Hi there! I'm Jérôme from France, currently a UK based freelance engineer and a globe trotter. My main experience is Embedded Software with Electronics Engineering. In fact, I love experiencing much broader things, learning new skills on the go, that's certainly why I like IoT.

This site uses Akismet to reduce spam. Learn how your comment data is processed.